The text in italics has been taken from the Web Site of the Church of Saint Michael. 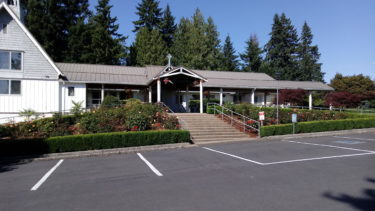 Sandy’s St. Michael’s parishioners have a history that dates back with the pioneers of the Northwest territory. “Fr. Louis Verhaag offered the first Mass in Sandy, Oregon, in the residence of Paul Dunn. His congregation numbered fifty persons, one fourth of whom were Catholics and most of whom had never seen a priest before. Subsequently priests from East Portland continued to visit Sandy. In June 1886, Mr. Meinig donated an acre of land and a frame church was planned. It was erected until 1898.”

Looking through the pages of Sandy’s Centennial Book an article appears relating to Sandy’s St. Michael’s Church which states that on December 18, 1894 land was purchased from Henriette and George Rahner on Main Street in Sandy across from the present-day post-office building. From the Catholic Sentinel, July 21, 1898; The building will be a frame structure, 26X46 feet, and a tower 8X8 feet and 20 feet high.” Sandy was about to have a Catholic Church building. Cost $700.00.

This was such a pleasant experience. Fr. Gregg Bronsema gave such a great sermon you could ask for.

Again, in the Chronicle of Catholic History and dated December 15th, 1898 reads: “A small church forty-six by twenty-six feet at Sandy, Oregon, built by Fr. Anselm Wachter, OSB, was dedicated by Fr. J.J. O’Riordan under the title and patronage of St. Michael.” It was noted at that time that the new building 46X26 feet, with a neat porch had cost $700.00 with a debt of $100.00 remaining.

Another article from the Catholic Sentinel (May 11, 1911) states: “The parishioners of St. Michael’s Church are rejoicing over the announcement of semi-monthly services in the future. Many of them remember when Mass was celebrated there possible once in two years, and later on, once or twice a year. For the past few years the first Sunday of every month has found a priest for the services.”

The St. Michaels Parish was established in the 1850s’ . 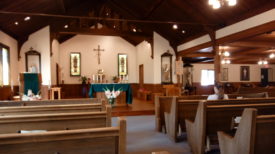 The first church was destroyed by a fire on October 28, 1917. The second St. Michael’s Church at Sandy was built under the direction of Fr. W.R. Hogan by Herman Miller. For a time, this parish was served by the Benedictine Fathers from Mount Angel. Since 1933 Sandy was attached to the parish at Estacada in charge of the Rev. Martin Doherty. Subsequently Sandy became the parish center with Estacada as a mission. It was later learned that after the fire of the first church a new site was located and purchased from Maggie Proctor January 24, 1918 on the corner of Strauss Street and Pleasant Avenue, the site of the present church. This second building is still in use.

It is interesting to note here that Helen Milan was one of the young people of the parish and with her first job in Portland spent her first paycheck of $35.00 purchasing and donating the three stained glass windows bearing her name in the choir loft of the present church. Following Fr. Hogan’s pastorate, the chapel was attended by various priests from the Abbey at Mt. Angel. Since 1933 Sandy had been attached to Estacada, but in 1953 members of the St. Michael’s parish purchased a house on the corner of Strauss and Pleasant Streets which would be used as a rectory. This house was purchased on December 28, 1953.

From the files of the Catholic Sentinel dated July 1, 1926 comes the first mention of the church at Welches: “New church on Mt. Hood Loop, St. John, is under construction at Murphy on the Mt. Hood Loop. The church will be attended by Fr. Bonaventure, OSB, pastor of St.

Michael’s Church, Sandy, Oregon. The property on which the church is built which includes an acre, was donated by Mrs. Honora Murphy, an aunt of Abbot Bernard Murphy, OSB, of Mt. Angel. An interesting note is found in the historical files of the Catholic Sentinel dated 1937 which reads: “A new chapel of St. John, to be built at Welches this summer, replacing the chapel that collapsed last winter. Mass will be offered in the open every Sunday until the new chapel is completed. Rev. Martin Doherty is the pastor of Welches’ St. John’s Church became the Mission of Sandy’s St. Michael’s Parish.