HAPPINESS is to have EVERYTHING, you need.

NOT the need to have EVERYTHING. 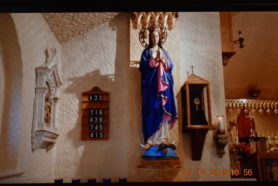 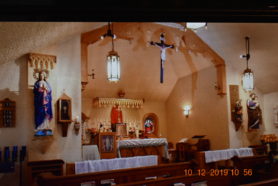 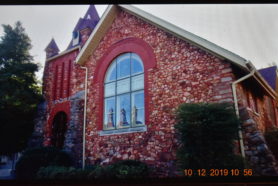 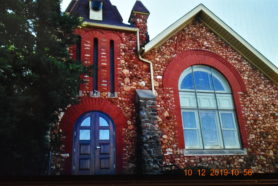 We’ve been in this area before, about 3-4 years ago and we attended the Our Lady of the caves Church much closer to our campground. Unfortunately it had a fire and

has been under reconstruction for some time now. We’re told that they were at the paving the parking lot part. It should reopen shortly.

According to the history of St Helen’s Church it was the inspiration of four women who were converts to Catholicism. This inspiration was in 1893. Prior to that the town of Glasgow had priest visit the town monthly. It was these same four women that went out and gathered stones which helped to build St. Helen’s. Once they began to build they were joined by many others in the town, both Catholic and non-Catholic joined in the effort. Sadly it wasn’t until 1953 that the church had its own resident priest. The parish began officially with only eleven parishioners. Since then the parish count has grown to over one-thousand parishioners. As big as this number may seem it represents only about one-percent of the total population.

In the top right side picture , if you look closely, is a statue of the Blessed Virgin. To her left is a display case with a reliquary in it. This reliquary displays a very small piece of the crucifix Christ was crucified on. Your questions might be;

Why not a relic of St. Helen or Why the Cross. Here’s why! In or about the year 200 ad, Emperor Constantine’s mother was Helen, before sainthood. She was a very devout Christian, he was as well. She had a great desire to go back to the villages of Bethlehem and Nazareth and even Jerusalem and inquire about any information, clothing or even written documents pertaining to the time of Christ. She got to Guthega and began digging the place up. Not that deeply buried she discovered dozens of crosses that were used to crucify those who were found guilty of very serious crimes. Immediately she asked a local for the name and whereabouts’ of a very sick person in the village. Within minutes that person was presented to her. Helen had the sick person lay her hands on each of the crosses and ultimately she touched one that healed her on the spot. This, she said, would be the real cross. She also was able to recover many items of clothing as well.

A piece of this cross is displayed in the reliquary.