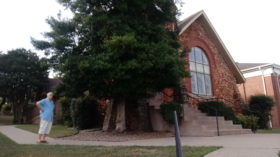 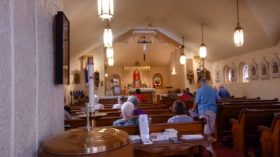 We’ve been in this area before, about 3-4 years ago and we attended the Our Lady of the caves Church much closer to our campground. Unfortunately it had a fire and has been under reconstruction for some time now. We’re told that they were at the paving the parking lot part. It should reopen shortly.

According to the history of St Helen’s Church it was the inspiration of four women who were converts to Catholicism. This inspiration was in 1893. Prior to that the town of Glasgow had priest visit the town monthly. It was these same four women that went out and gathered stones which helped to build St. Helen’s. Once they began to build they were joined by many others in the town, both Catholic and non-Catholic joined in the effort. Sadly it wasn’t until 1953 that the church had its own resident priest. The parish began officially with only eleven parishioners. Since then the parish count has grown to over one-thousand parishioners. As big as this number may seem it represents only about one-percent of the total population.