This church is located in Morris, IN just outside of Batesville, IN-The priest doing the service was, I believe, Father Shaun Whittington. 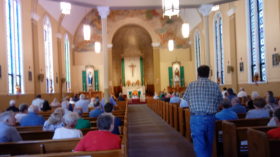 This service took place on a Saturday night with almost a 100% attendance. Seldom have we seen such attendance except for Vincent de Paul in Wildwood, FL. The alter servers, four of them, were impeccable. The bulletin lists the young man in the black and white cassock as MC-Carter W.. He watched over the three others every minute of the service. The other three servers, a little younger than he was, wore white cassocks with a cloth pattern similar to what you might have seen in a knights Templar movie. They were so impressive looking, and worked through the service responsibilities in almost military-like precision. His duties were, impressively, those you’d see a Deacon perform, all except for the reading of the Gospel. The Eucharistic Ministers were also equally as impressive. I wanted so much to speak to Fr. Shaun after the service, but was unable to spot him. He should be highly recommended for such a professional service. We have attended over one-hundred Saturday night services and none that equal this amount of sophistication, especially on the part on the alter servers. We’ve attended Mass at the church in the past, at least once about 3-4 years ago, but I do not remember being this impressed. When I was 12-13 I too was an alter server. I had been for several years. Then Fr. Gagnon was assigned to the Sacred Heart Parrish in Brockton, MA. He was just out of the seminary and I’ll never forget all the hours we’d practice, especially for the Holy days of Easter and Christmas, he had some of those services with 10 or 12 alter servers on the alter. I never had a chance to assume the MC position, Joe Piche always came in ahead of me. Most importantly were the parishioners. Only once before had we ever entered a church for Mass and had the Host in Exposition. Carla and I came in and, as always, genuflected, on knee, and entered our pew. It wasn’t until we knelt for prayers the we noticed the Exposition of the Holy Eucharist. We try, very much, to follow the rules and customs of the church, but today we messed up. I know it is an extra responsibility, but someone should have posted a sign for us strangers to the parish, that the Holy Eucharist was in Exposition and a double knee genuflection should be performed. Getting back to the parishioners. we would see a great many grey-haired seniors in attendance. What was surprising were all the young families with kids and infants everywhere; something must be in their water supply. It was heavenly. Only wish we were going to be here another week to attend another service. Truly an awesome experience!