Please take the time to leave a comment
at the bottom of this blog.
I relish the positive ones and will learn from the negative ones.

5.29.19- Wednesday- Smith Rock in Redmond, OR
By 7 am we were on our way to Redmond, OR to have Big Country RV try to fix our slide problem. We arrived at 8am sharp and dropped off the coach to be fixed. In the interim we took ourselves out to breakfast to the Original Pancake House in Redmond. We both ordered Bacon and Eggs. We were served two scrambled eggs with four slices of “thick bacon.” The meals were great. 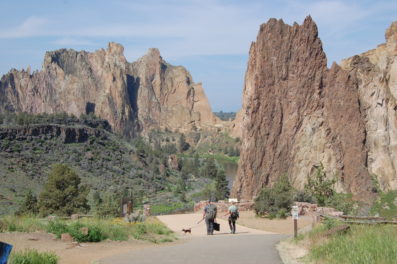 The park covers over 650 acres and hovers around 3000 feet in elevation. The major rock faces are welded tuff, or compressed volcanic ash formed 30 million years ago. (From Smith Rock Web Site) 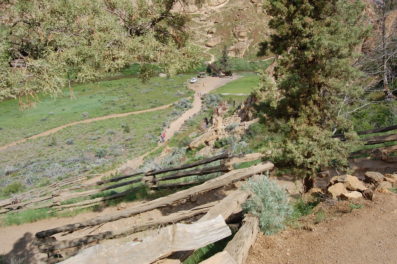 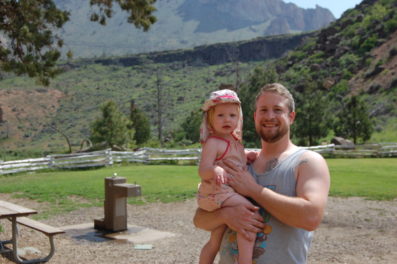 About thirty-million years ago, a volcanic eruption occurred, pouring volcanic ash over hundreds of acres in the area nearly one-half mile deep. Below is the bridge we must cross then decide either to go right or left, we chose right. 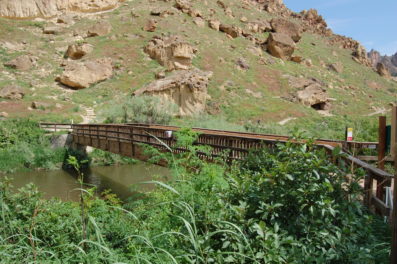 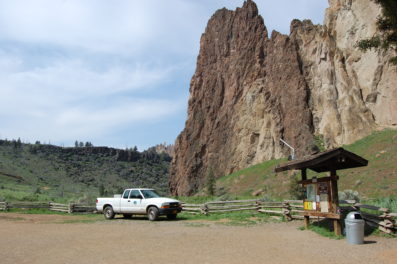 After the eruption the sides of the volcano (a caldera) was formed when the debris in the volcano collapsed into the lava chamber. The result of this collapse and the eventual caldera sides turning into rock gives us what we see today. 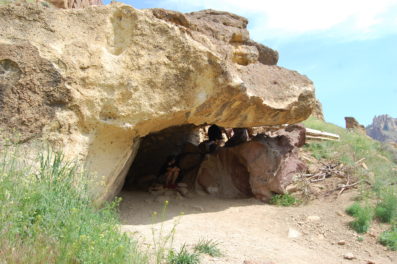 Guess you could this a natural cave or at least a temporary shelter. This shelter borders the Crooked River. We only walk another five-hundred feet then decide to go back. 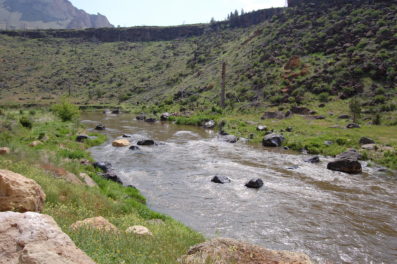 In time a river was formed called the Crooked River. Just like we’ve seen at the Grand Canyon, it eventually ate away any and all lose sand and gravel which gives us the six-hundred foot cliffs overlooking the Crooked River. 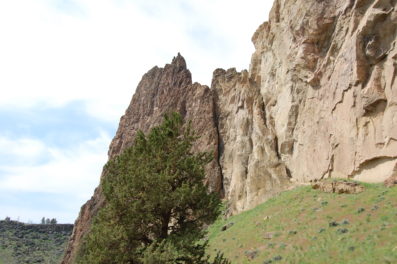 Up to this point we crossed the bridge and took a right but only went about a quarter mile before we turned back to see what we could going left from the bridge. From here on in we’re on the left side of the bridge.

The temps today are great, low seventies, but this dog just had to cool of a bit more. It eventually came back to its master. On the left side of bridge looking back. 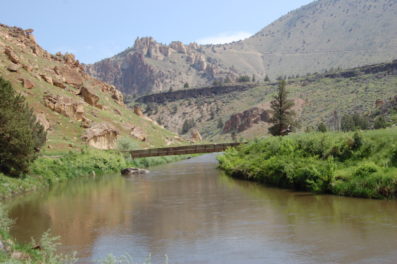 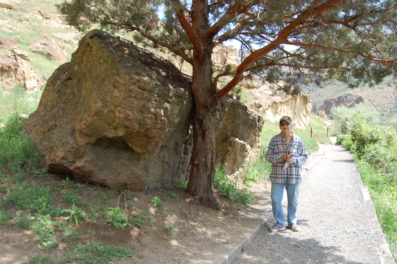 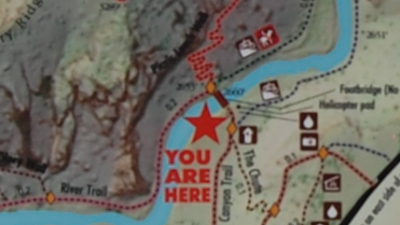 In the picture above you see the big black line, that’s the road where we parked. We had two routes to take to get down to the river bed; the black line or the redline. We chose black to go down. Coming back we decided on red since it was a much less steep hill than the black route. We must chose one of these two routes for going back- we decided to go  to the right; it’s longer but much less steep. 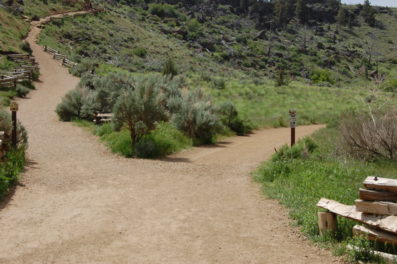 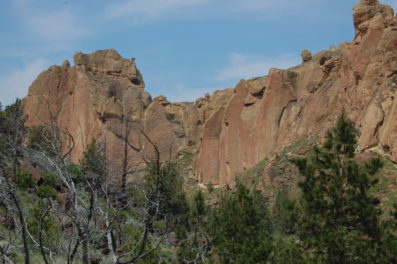 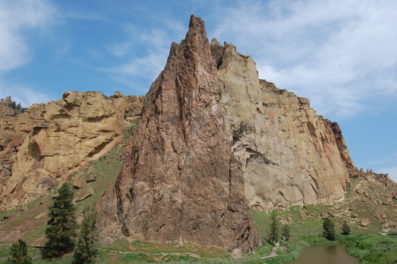 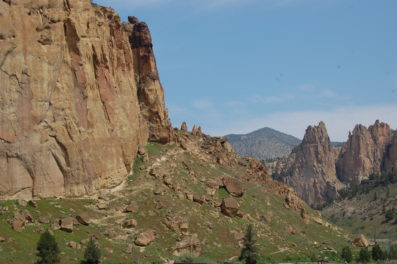 Can you find the hiker in the picture above, look just below center and to the left. I tried to crop it but just could not do it, but he is there on the path below the cliff. Below is a crop from the picture above. Once you cross the bridge you can also go straight, instead of following the river. That’s the squiggly zig-zag trail going to the cliff. That trail will take you behind the cliff and eventually to the top of the cliff. It is call the “Heart Attack Trail” I believe I was told. 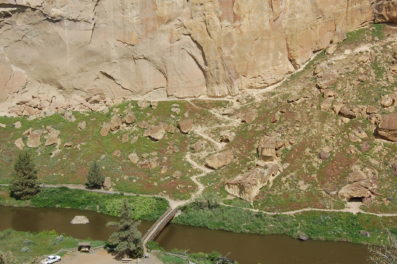 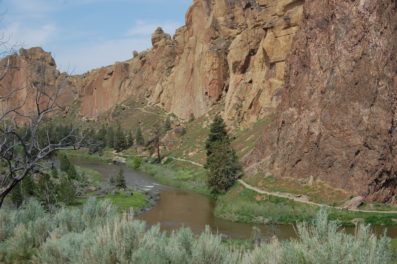 As I mentioned before we walked the left side for about one-thousand feet over to about the left side of the picture, then decided it was time to go home. Back to this picture again. You notice the left side literally goes straight the way we want to go but it’s a brutal uphill climb so we’ll go to the right. It will take longer but it’s less taxing. 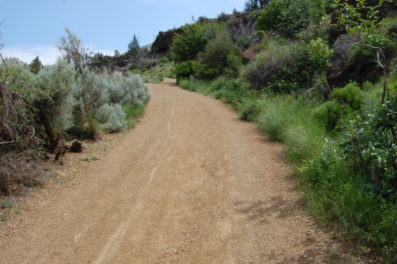 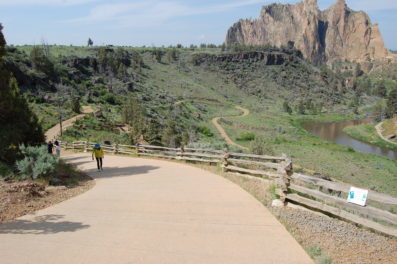 The path up is very wide and smooth. the other path was laden with rocks. Below, NO! this is not the top, still another two-hundred feet to go.  Just a universal resting spot especially for all those with kids. 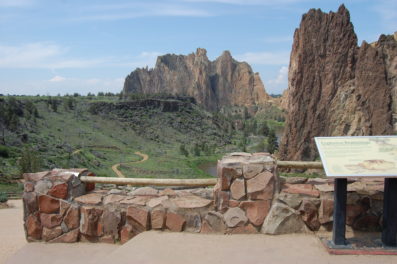 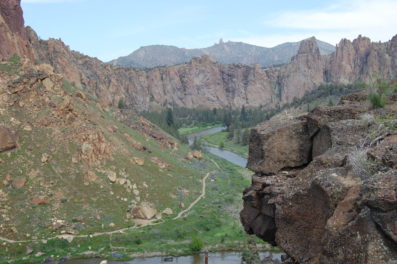 Another picture of the trail to the right after the bridge. We did walk all the trail you can see and possibly another five-hundred feet beyond still following the Crooked River. 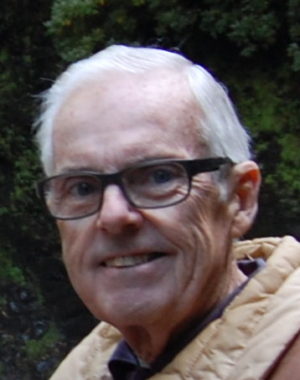 To view the Journal for MARCH click on this link GOTO MARCH Journals…or click on the “header at the top of this page, select “Journals” for the drop-down menu. If pictures appear missing, use your “refresh” button.

We arrived at Verde Valley late and in the dark. Jina, at the Ranger Station issued us our paperwork and described the whereabouts of our site. Campgrounds road-ways are not lit. We asked her if we could spend the night in one of parking lots. In the past at another park we were told no. Jina had no problem with it realizing we were exhausted. She directed us to the administration building which was challenging in itself, but we found if and slept well. By 11 we were on the road again to visit with Cindy and husband Paul. She held several positions at our Greenacres child Care Center. Shortly in the visit with decided to grab a bite to eat at Oregano’s in Falstaff. The food was very good and the company even better.  To add to an already perfect afternoon was Katie, her daughter. She was also a guest at our center probably around five years of age or so. She just as pretty at twenty-five as she was cute at five. Needless to say we all spoiled her a bit, especially me, but you could not help it. She was cute, very polite and always anxious to assist anyone at anytime.