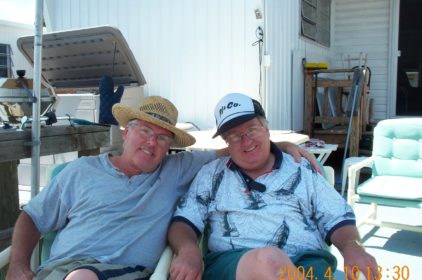 (Dennis is the younger dude on the right)

Dennis attended Cardinal Spellman HS and graduated in 1965. His devotion to his faith began well before Spellman and accompanied him throughout his life. From Spellman he attended Bentley School of Accounting, which prepared him for a position as Assistant to the Corporate Accountant of Bridgestone Tire Company in California; a position generally held by others twice his age.

After a few years the Florida bug bit him and he moved to Boca where our mother was living in Century Village. Now he’s jobless. Everyone loved Dennis. A couple from New York asked Dennis if he would check their Condo every other week for the summer months for a fee while they traveled back to New York for six months. Within a couple of years Dennis was checking over 300 condos for “snow-birds;” (At least was supposed to check) Not a bad gig for six months work!

One afternoon when he was at home, a pal he knew from a few years back asked Dennis if he would put him up until he got back on his feet, Dennis, of course, said yes. This gesture gave him an alternative to checking condos so he sold that business and within a couple of years he was providing individuals this same service at a very good weekly rate.

His last years prior to retirement were spent caring for our mother with caregivers to help until she passed. By the time he retired he had acquired properties containing twenty-one rentable rooms in the city of Boca, one of Florida’s most desirable locations. Most admirably of all was the modest life style he lived even though he was well travelled. He finaly began to relax and enjoy life. He enjoyed many weeks and weekends with us in our motorhome and, as you see in the picture, at our weekend home on Seabird Island, Florida, fishing.

But at sixty-nine and having sold all his apartments life would throw him a curve he was not expecting. One week after checking out a motorhome that would be his retirement plan, he would have a stroke. This stroke left him left-side impaired. For five years he would be confined to a chair in his home with 24-hour care from caregivers. I don’t know if I could have endured all he did all those years. Carla and I would, of course, visit him especially during the Florida winter months until Covid-19 came on the scene. We stayed to ourselves for fifteen-months until all of us got our “shots.”

In May of 2021, Dennis would turn 74. It was safe for all to get together for a change. We arrived on the 30th of April and had four great days visiting together. On the 3rd we celebrated his birthday. The next day he had a second stroke. We would never speak to Dennis again. Dennis would now be comatose-like and in Hospice care.

On the evening of his second night in hospice Carla and I were with him listening to him breathe in raspy tones as he was desperately trying to take in air as saliva filled his throat. Dennis for years was desperate for HIM to call him from this earth but HE never obliged. Before leaving Dennis that night I knew if it were possible he would try to survive this challenge, but to survive was not an option. Before leaving that evening, I approached Dennis’ bed, put my arm firmly around his head and whispered in his ear; “Dennis you’re good, you’ve done everything right. You’ve been given the last rights and you have your scapular; HE is finally calling you and Mom is anxious to see you again- now is the time to stop fighting.”

Later that evening we receive a call; Dennis had passed!