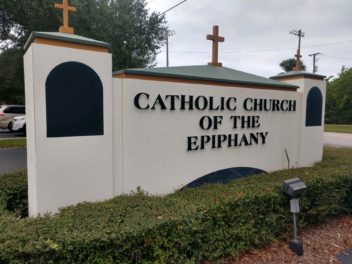 From the parish Web Site:
In February of 1960, the Catholic population of our area grew to the point that then archbishop, Joseph P. Hurley, of the diocese of St. Augustine decided the time was right to establish a new mission church in east central Florida. There were only 2 dioceses then in the entire state of Florida – St. Augustine in the north and Miami in the south. The new mission church was affiliated with St. Paul’s in Daytona Beach. As our first pastor, Fr. David Page’s job was to come up with a name for the mission church. Epiphany was chosen from several suggestions. Fr. Page felt that “Epiphany” would be appropriate for a new church just beginning.
Msgr. William Mullally, pastor of St. Paul’s, celebrated our first Mass in February of 1960. That Mass and those through December 1963 were celebrated in the Palmetto Women’s Club and Library building as we had no facility of our own. We sat on wooden folding chairs donated by the local funeral director. Air conditioning was a far away dream so we cooled ourselves with folded paper fans. The altar was a collapsible picnic table with an altar cloth draped over it and the priest’s vestments were made over hand-me-downs. 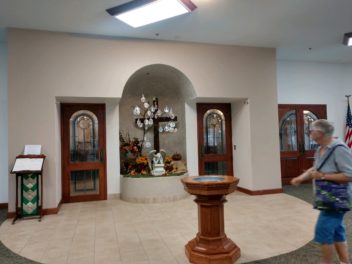 Our first church/social hall was built by Greening & Sayers. It was a prefabricated roof with block walls. Ground was broken on October 11, 1962. This date coincided closely with the start of the Second Vatican Council directed by Pope John XXIII which changed so much about the way we worship and expanded the role of the laity within the church.
Fr. Page went door to door literally telling people about our new church and inviting them to become Epiphany parishioners. In 1964, Fr. Cyrill Donnelly was assigned to Epiphany as an assistant paster and on December 22, 1963, Fr. Page celebrated Mass in our new church (which later became our Bingo hall). Early that same spring we purchased the Kull House on East Fleming Ave. for our first real rectory/office. 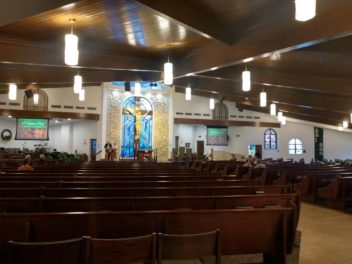 On March 15, 1964 Archbishop Hurley dedicated the church; it was big and beautiful! We had an exquisite Epiphany window (designed by Conrad Pickel Studio) that depicted the Magi seeing the infant Jesus for the first time. We had 2 statues – one of Mary with Jesus, and another of Joseph. They were depicted not as unrelatable figures of long ago but a mother with a broom in her hand teaching her child and a loving Joseph who was a hard working carpenter. Our Crucifix showed the Savior Jesus on the cross. They were from the Pante Studios in Ortisei, Italy and were carved from lindenwood. Golden “Ark of the Covenant” cherubim adorned our simple wooden altar and our wooden camp chairs were replaced with padded kneelers. We were in heaven!

No longer did Fr. Page have to go door to door to find parishioners. Our reputation as a caring community church had gone before us and people were literally beating down the doors! Fr. David Page was reassigned to a parish in Orlando in January 1966 and Fr. John Caulfield became our second pastor. He was with us for seven months until the fall of 1966 at which time we received our third pastor, Fr. Michael Hanrahan who was with us until 1969. Fr. Cyril Donnelly, who had been Fr. Page’s assistant, remained to help Fr. Caulfied and Fr. Hanrahan. Fr. Bernard Caverly was also an assistant until 1966. Fr. Donnelly and his German Shepherd, Sam, were a frequent sight either mowing the lawns around the church or fishing on the river bank of the Halifax in the mornings. Fr. Gerard Granahan was assigned as associate from 1969 through 1971. Fr. Hanrahan was reassigned in the spring of 1969 we were bursting at the seams! During the winter months, and special feast days like Christmas and especially Easter, the grassy area in front of the south entrance to the church would be full of people sitting on the grass or standing trying to hear the sermon or get inside to receive Communion. It was fun for the kids but a real trial for the adults. The population of Port Orange had grown to 3,780 persons, over double from only ten years earlier. 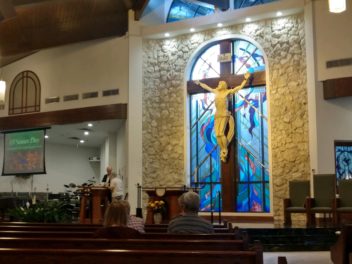 In may of 1969, we received our fourth pastor, Fr. William O’Farrell. Joseph Blais, Jr., a local architect designed another “new” church for our growing parish. Doyle Kennedy, a parishioner, was the general contractor. Ground breaking for this project was September 5, 1971. The first Mass was celebrated on September 6, 1972. Due to a lack of funding, our parking lot for 2 years was soft sand. Many a Sunday would find Fr. O’Farrell and the ushers pushing parishioners out of the mud or soft sand. Finally, we got our asphalt parking lot to the delight of all. The dedication of the new church by the first bishop of the new Diocese of Orlando, Bishop William Borders, was on March 31, 1974. Our “new” church was built on the west side of Lafayette Street with a new rectory/office on the south end of the complex. The “old” church then became our social hall on the east side of Lafayette St. The new church incorporated all of our previous religious art and could seat 500 people which meant everyone could finally have a place to sit. Again we thought this was the most beautiful of churches. The altar wall was made of white fossilized coral (key stone) from the Florida Keys. The ceiling was tongue-in-groove cedar with massive support beams. The main beam was the largest glu-lam beam from Oregon ever shipped to Florida at that time. The pews were padded, a real plus for our elderly parishioners. 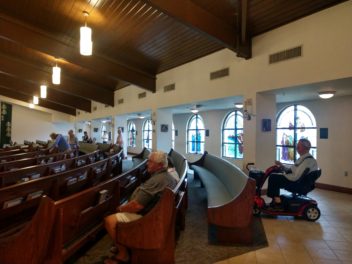 Fr. O’Farrell had many associates over the years including Fr. Joseph Harte from 1971 through 1974, Fr. Peter Quinn from 1974 through 1979, and Fr. Sean Shine from 1979 through August of 1981. Fr. Shine was also our interim pastor for several months between Fr. O’Farrell’s retirement and Fr. Frank’s assignment to Epiphany as our new pastor. Fr. O’Farrell retired due to ill health in September of 1981 and we received our first new pastor in 12 years, Fr. Frank Smith. He realized immediately our need for a larger social hall for large gatherings and the need for additional seating in the church itself. The population of Port Orange had quadrupled this time to 17,833. It was the fastest growing community in the U.S. at that time according to a report by the Associated Press.
By January of 1984 Fr. Smith had initiated a three year fund drive to renovate and add more seating to the church. This building campaign added a new west wing to the church, a chapel, a large social hall that could seat 500, additional meeting rooms and an improved sound system as well as 2 new items. The colorful faceted glass epiphany windows flanking the altar area were 20′ tall from floor to ceiling with the Magi on the west side of the altar and Holy Family on the east side. They were created by White Studios in Sarasota FL. Fr. Smith’s first associate was Fr. Tim Kandle from October of 1981 to June of 1984. He was followed by Fr. Charlie Mitchell who transferred to Our Lady of Lourdes in September of 1987. Fr. Chris Hoffmann became our associate from December 1987 to June 1989. At the same time we had another associate, Fr. Joseph Dung Tran, from Vietnam, who left in 1987 to study in France.

With the renovations we kept the previous art (except for the Magi window on the west end of the altar which had to be removed to make way for the new west addition). We received new stations of the cross and placed the original ones from Italy in the Meditation Garden. We had a beautiful new altar, tabernacle and ambo and parquet floors installed on the sanctuary floor. The cherubim from our first church (now Fr. Smith Hall) were installed flanking the tabernacle in the new chapel. The original “Epiphany window” was placed in a new setting on the west wall in the new addition. Chairs were added instead of pews to accommodate overflow crowds. The chapel also doubled as a “crying room” for families with infants and small children. On January 5, 1986 Bishop Thomas Grady the second Bishop of the Diocese of Orlando, rededicated the new facilities and our renovated church which could now seat over 800 people.
In 1989, after being our pastor for 8 years, Fr. Frank Smith was transferred to Ascension Parish in Melbourne. In July of 1989 Fr. Charlie Mitchell came back to Epiphany but this time as our sixth pastor. Fr. Paige Blakely, a seminarian friend of Fr. Charlie’s came as our associate. Deacon Jose Bautista, a seminarian from Columbia helped out from 1989 until his ordination in September of 1991. The parish was continuing to grow and before Fr. Charlie was transferred to Altamonte Springs in 1994, he initiated a committee in 1993 to explore the possibilities of renovating the church once again. The population of Port Orange by 1994 had reached 40,000.
On February 5, 1994, Fr. Paul Kamide became our seventh pastor. In 1995 he held an informal meeting with interested parishioners regarding the proposed renovation of the church. In July of 1996 Fr. Kamide announced a $1.2+ million capital campaign to expand the church with seating for 975 people designed by architect John Dickerson of Orlando and built by Hall Construction (owned by parishioner, Jim Hall). It would also introduce more natural light and a new Chapel of Adoration. We put in additional parking with lots of landscaping and the Mother Teresa Memorial Plaza featuring the original bronze statue of “Mother Teresa and the children” by Timothy Schmalz and “Rainbow Sunshine” boulders from Arizona courtesy of “Pebble Junction” forming our ‘Trinity’ fountain. More boulders defined the bricked sitting area in front of the church nestled among the shade trees. Stained glass windows depicting “The Jesse Tree” and a new crucifix were among other new items planned to beautify the church. All of the stained glass windows including the Altar and Chapel Glass were made by McMow Studios in Lake Worth, FL. James Kucera of Watra Church Goods coordinated the creation of the new art in the church. The artist who carved the corpus is Rick Bagabaldo. He was born in the Philippines in 1951 and came to the U.S. via Miami in 1989. He has carved wood since he was 14 years old. The corpus took over 2 months to carve from lindenwood. Watra also commissioned the altar and tabernacle and ambo which were designed by Ronald Zawilla and carved by Bob Ballard from lindenwood. Alberto Gomez from Colombia painted the “Wedding at Cana” mural in the gathering room. The new church was dedicated on March 13, 1999 by Bishop Dorsey (by 2008 the population of port orange was 56,067).
Bishop Thomas Wenski conferred the title of Monsignor on Fr. Paul on May 9, 2008 at the Orange County Convention Center during the “Festival of Faith,” a celebration of the Diocese’s 40th anniversary. Msgr. Paul Kamide officially retired on November 30, 2008. Bishop Wenski assigned Fr. Michael Giglio from St. Teresa in Titusville, as our new pastor taking charge in January 4, 2009 – the Feast of the Epiphany. Our assistant pastor, Fr. John Bosco Maison from Ghana had worked in Jamaica for four years before coming to the Diocese of Orlando and being assigned to Epiphany on December 1, 2008. The population of Port Orange in 2009 was 56,732.