It was around 7:30 pm and we were watching a Superman movie. The scene was Clark Kent’s father being sucked up by a horrendous tornado. 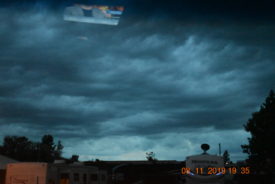 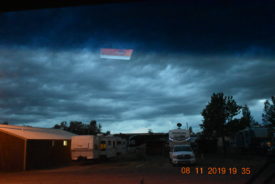 Fast forward to 8:30pm the wind was picking up, the extended awning on the coach was moving radically, our door is locked in the open position and the screen interior door is rattling violently. Carla instinctively told me to get the awning in and after I would try to close our door. The awning retracted with difficulty but the door would be a different story. 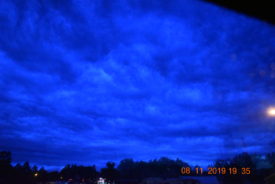 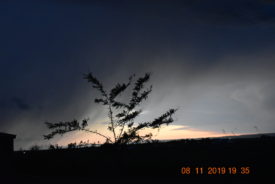 I stepped down our steps and unlatched our door and then it happened. The wind came up so violently I could barely retrace my steps back into the coach. The unlatched door would not break away from the wind forcing it against the coach. I tried again to close the fixated door by leaning out the door opening desperately holding to an inside boarding bar in the coach. 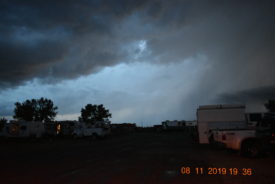 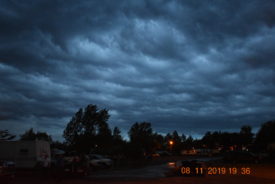 Within seconds after leaning out to try to close our door my body felt as though it was in the clutches of an invisible force. This force was desperately trying to pry my body out the open doorway and away from the coach and the door continued to affix itself to the coach. Finally after about 2-3 minutes the wind suddenly died in force for about 15 seconds. I took advantage of the break to close the coach door. Within seconds we had all the windows in the motorhome closed and we immediately retreated to the presumed safety of our bedroom. Instinctively we positioned ourselves at the foot of the bed and pulled our foot-thick Denver mattress over our heads. 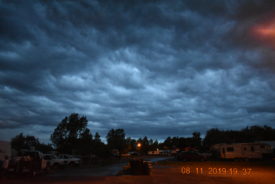 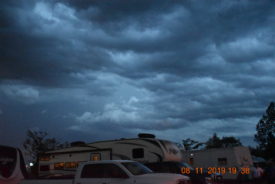 It did not take a person with a PhD in weather anomalies to know we were in trouble. In the minutes it took me to retrieve the door I could not remember seeing a  funnel cloud, but the clouds were so dark and ominous they could only have come straight from hell. The wind began again with seconds of our closing the door and we were spellbound, lying perpendicular to our bed on the floor.

The sounds of the wind outside beating up the coach in every direction was a horrendous roar. Did it sound like a train I did not have a chance to think of that. The coach was shaking left to right in endless motions. Lying on the floor with our mattress as our make-shift ceiling cover  was frightening. For fifteen minutes or more the floor shook, it never ceased bouncing up and down from just an inch to much more over and over again. 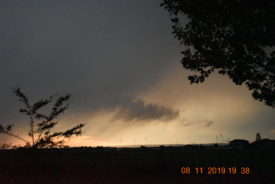 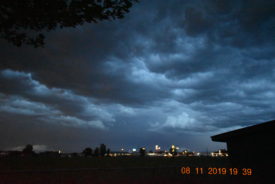 The heat under the mattress was almost unbearable. We both had difficulty in breathing but we felt relatively safe. Was it a tornado, yes; but not directly over our location. Were we afraid I’d say yes, we’ve experienced many challenges in the past, even a brush with hurricane Irma from a few years ago, but this was life threatening. Not having seen any funnel cloud in the direction of the wind, minutes ago, I felt fairly certain we would not be sucked up into the upper atmosphere, but I felt strongly the chances were very good this might just be a Microburst. The type of weather phenomenon that could easily crush and flatten our coach, hopefully our mattress might cushion us from severe injuries with this possibility. Another possibility is a chance that a high-enough wind could topple our motorhome to its side or that another RV, with a strong enough wind, being jammed into us. 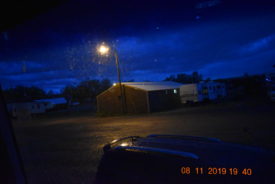 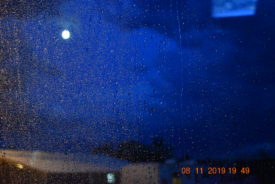 For 15 to 20 minutes we huddled in place frightened, praying and feared life’s worse scenario. The tornado, an EF-1, was located mostly in the Billings, MT area, not far from here, but we were experiencing the outer winds of this very heavy wind. By 8:50 the heavy winds subsided and we extricated ourselves from our shelter. The pictures of the clouds were after the weather phenomenon had ended. The clouds just twenty minutes ago were so black I doubt I would have been able to take a decent picture. We and many of the other RVers here began to go out and ask if everyone was okay.

Never want to experience something like this ever again!

Courtesy of the Northern Wyoming News:

WORLAND – The National Weather Service completed their site investigation to a storm that hit Powder River Pass on June 19 and has categorized the storm that caused damage to trees and snow fences as an EF-1 tornado.

According to a release from the NWS Riverton office, on Wednesday, June 19, a thunderstorm began to develop on the border of Park and Big Horn counties around 5 p.m. As this storm moved east it strengthened and reached its peak intensity in extreme southeastern Big Horn County. The storm crossed into Johnson County and produced a tornado on Powder River Pass in the Bighorn Mountains just before 7 p.m.

Considerable tree damage occurred along and near US Highway 16 as the tornado moved east along its 3.7 mile path. Hundreds of conifer trees were uprooted or snapped at their trunks. Additionally, several large wooden snow fences were torn apart, with fencing debris thrown in all directions. This tornado was unusual in that it occurred at a high elevation of just under 10,000 feet along its western path.

The damage produced by this storm was consistent with an EF-1 tornado, with estimated peak winds of 110 mph. The time of the tornado was estimated by comparing the location of the damage with radar imagery, according to the NWS release.

The maximum width of the storm path was 250 yards.